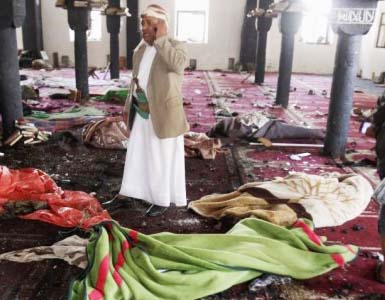 Shiite congregants in Sana’a called for death of Israel and the US. Then an IS suicide bomber killed scores.

A video recording of a deadly terrorist attack at a Shiite mosque in Yemen on Friday revealed that worshipers were chanting a slew of hateful slogans just as a suicide bomber detonated himself, killing scores of people.

Link to the video:

The bombing, one of three committed in a pair of mosques, was carried out by the Islamic State during weekly prayers. At least 142 people were killed and 351 were wounded in the attacks, carried out in the Shiite rebel-controlled capital city of Sana’a.

A video recording of a deadly terrorist attack at a Shiite mosque in Yemen on Friday revealed that worshipers were chanting a slew of hateful slogans just as a suicide bomber detonated himself, killing scores of people.

The amateur video, hosted and translated by the Arabic media watchdog MEMRI, shows a preacher conducting a sermon at the Houthi al-Hashoosh Mosque, leading the crowd in an impassioned cry against Israel, the United States and Jews.
“Our belief in Allah will increase after today. We will triumph over their deceit and their arrogance. Allah is with us,” the preacher said.

“Death to America. Death to Israel. Curse upon the Jews. Victory to Islam. Allahu Akbar,” the worshipers recited en masse.

Then a terrorist roaming among the mosque’s patrons detonated himself, causing a scene of mass panic.

This must be the most spectacular recording ever, that expose the evil of the secular-Islamic nexus.

Multitudes of western leaders claim that terrorism in the name of “allah” has nothing to do with Islam.  There can be no greater evils than to support such a blindfolded view on Islam.

In this video the curses of America and Israel becomes a chant of the Imam. A Muslim leader loyal to the ayatollah of Iran, and  a “peacemaker in the Middle East” according to the Obama administration.  The gathered Muslims copy the leading son of Muhammad, and proclaim death towards two democratic nations. In the very next moment, some opposite sons of Muhammad brings death and destruction to these worshipers of Satan. The sons of Muhammad who brought death is also killed. Satan can claim another victory. Hell is being populated with new souls.

The curse of Islam is first and foremost a denial of Jesus the Messiah as eternal God. The Muslims are told by their leaders to renounce the death and resurrection of the Jewish messiah, and not to apply the blood of the lamb of God as an eternal atonement for sins. The next gross error of Islam, is to claim that the land of Israel do not belong to the Jews. But rather to the Arabs who believe in “allah”.

This is the verdict: Light has come into the world, but people loved darkness instead of light because their deeds were evil.

Islam is evil to its core. If you have ever endorsed this violent ideology as the “religion of peace”, please pay attention to this video. Pray to Jesus the Messiah to forgive you sins, and to save your soul from the eternal fire of Hell. Amen.

43 thoughts on “Mosque blown up while Muslims cursing Jews”