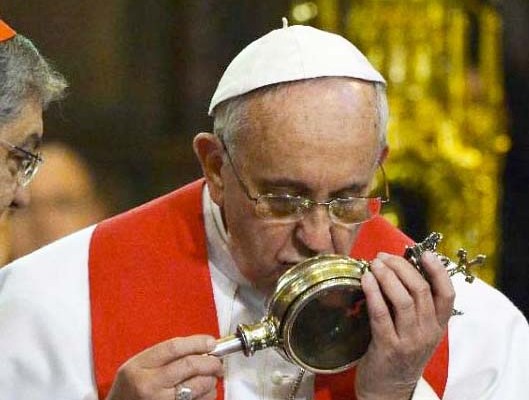 The Pope kiss a container with the dried blood of Naples’ patron saint Januarius during a ceremony during a visit to the southern Italian city.

Archbishop of Naples Crescenzio Sepe showed the glass vial to the congregation in the city’s cathedral and declared: “The blood has half liquified, which shows that Saint Januarius loves our pope and Naples.”

Francis, known for his plain speaking, quipped that he and his fellow visitors to the city’s cathedral had failed to win the saint’s full affection.

“The bishop just announced that the blood half-liquified. We can see the saint only half loves us.” “We must all spread the word, so that he loves us more!” he added.

Each year thousands of Roman Catholic faithful go to the three special services at Naples Cathedral where the dried blood of the fourth-century martyr is said to turn to liquid.

Some people say the blood even increases in mass during these displays, though the church does not officially recognise any of the relic’s alleged transformations as a miracle.

The Roman bishop was decapitated during the persecution of Christians during the reign of the emperor Diocletian in 305 AD.

To kiss a container with blood of a mortal man, amount to idolatry. God of the Bible has given us many stern warnings. No man shall worship created items, but worship God alone in spirit and in truth.

The proclamation of Idolatry as “holiness” is the man reason for all the wickedness we see in the Roman Catholic church.

Therefore God gave them over in the sinful desires of their hearts to sexual impurity for the degrading of their bodies with one another. They exchanged the truth about God for a lie, and worshiped and served created things rather than the Creator—who is forever praised. Amen.

The Pope has given us amplified proofs that he is a man of lawlessness.  Not only does the Pope set a side the Scriptures in the name of “Christ”. The Pontiff elevates him self above the scriptures, and becomes like a “god”.

I love the Roman Catholics, and do not want to see their souls be wasted. They must renounce the evils of Pontifex Maximus, and embrace Biblical Christianity. I will continue to expose the Vatican, and all their blasphemies and crimes against humanity.

Matthew 24:24
For false messiahs and false prophets will appear and perform great signs and wonders to deceive, if possible, even the elect.

A lot of claimed to be “Christians” feel every miracle must be from “god”.  Such a claim is based on lack of knowledge of the scriptures. It has been plainly given all of us, that Satan has the power to perform miracles. The devil is even able to deceive the elect.

I pray that every Evangelical Christian do not compromise with the forces of Catholicism, as we approach the end of the age of grace. That will be a mortal error as we enter the age of judgment.

May Jesus the Messiah have mercy on all deceived souls.

15 thoughts on “The kiss of blasphemy and death”