The Israel President Shimon Peres is a freemason, knighted by the Queen of England, the former Colonial head of “Palestine”.  In 2008, the Queen made Peres a “honourary Knight Commanders in the Order of St Michael and St George”.

Peres is also closely connected to the Vatican, and embraces the pope as “His holiness”.

What did Peres and the pope talk about?

The topic was the future of the Old city of Jerusalem. Peres chat with the pontiff was well coordinated with his Labor party fellow Ehud Barak’s offer to Mahmoud Abbas: “Lets both hand over the Temple Mount to a special regime”. This is like music in the ears of the pope, who long to set up his throne inside the “Holy basin”.

At the conclusion of the audience, President Peres gave the “Holy Father” a one-foot tall silver Menorah on which is inscribed:

You should pay some attention to how freemasons greet each other when they shake hands.  Because they are ordered to put a tomb, outside of the hand of a higher Commander.

That both Tony Blair and Shimon Peres use the same odd handshake when they greet the pope, is not a funny coincidence.

This is the way high commanders among the freemasons greet each other.

While we know that Tony Blair has become a Papist. It should be rather shocking for Israeli citizens that their own president also takes his orders from the head of the Vatican. 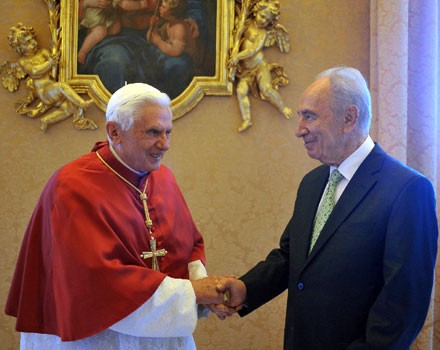