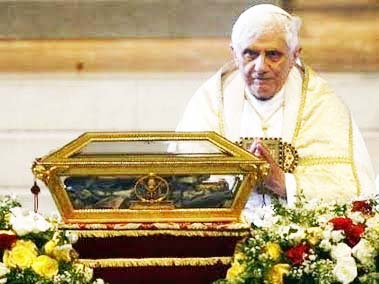 “The Pope was very devoted to Santa Monica (St. Augustine’s mother) and often visited the tomb of Santa Monica to pray,”

On 28th of August Pope Francis said Mass at the “chapter” of the Order of Saint Augustine, a meeting of the group’s leaders which will elect a new head as well as set out their aims for the next six years.

The Pope will head the Eucharistic celebration at the Basilica of Saint Augustine in Campo Marzio to launch the chapter, which takes place every six years, lasts for about two to three weeks and will start this Wednesday, the feast of St. Augustine.

‘Woe to you, teachers of the law and Pharisees, you hypocrites! You are like whitewashed tombs, which look beautiful on the outside but on the inside are full of the bones of the dead and everything unclean.

“The Pope was very devoted to Santa Monica (St. Augustine’s mother) and often visited the tomb of Santa Monica to pray,” Cardinal Prospero Grech, an Augustinian friar, said in an Aug. 26 statement.
Around one hundred Augustinians from all over the world will gather in Rome to elect their new prior General marking their one hundred and eighty fourth chapter.

The head of the order is expected to be chosen between seven to 10 days after the launch of the chapter, during the first week of September. Until he is chosen, the vicar General Father Michael Di Gregorio, who is second in charge, will preside over the meetings.

That a Pope is “devoted” to a mortal woman who died 1600 years ago, should be able to raise some eyebrows among Evangelical Christians.  Also a Pope who pray, bowing before a box with bones of claimed to be “saint Augustine”.

What is also astonishing, is that his mother of North African origin, was canonized and given the status as “saint”, not less than 1595 years after her death.

Surely, it is sometimes difficult to be sure who is a saint and not. Pope Siricius beatified her sometime between 384-399 AD.

Surely some kind of administrative hurdles caused the delay in the required examination of bones. The Catholic bishops simply lost trace of her grave.  The bones did not surface in a box before 1000 later.  First in 1430 A.D, the Pope ordered her bones to be transported to Rome.

Jesus said to him, ‘Let the dead bury their own dead, but you go and proclaim the kingdom of God.’

I am not sure about how the DNA of the bones was taken. I will be surprised if anyone had a blood sample of this “Monica”.  Surely, a lot of water must have left the rivers for the ocean. Even the legends must have gone missing.

A totally new story must have been written down, and presented to the Catholic as the truth.

There is only one suitable word for this. Fraud. Fraud in the name of “Jesus.” We can only pray for the deceived Catholics but have no pity on them.  Millions of them know the truth. They do not even reject the truth. They persecute every Roman Catholic who try to honor God of the Bible.

May Jesus of the Bible have mercy on all deceived soul of Roman Catholic, and release them from the bondage of the papacy. Amen.