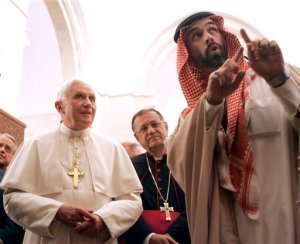 The Pope of Rome today used the Mosque al-Hussein bin Talal in Jordan to promote the new World unity religion. No words of The Jewish Messiah Jesus as the Only Son of God.

The pope had the following message to the Jordanian leaders of Islam:

«Muslims worship God, the Creator of Heaven and Earth, who has spoken to humanity. And as believers in the one God we know that human reason is itself God’s gift and that it soars to its highest plane when suffused with the light of God’s truth».

The head of the Roman Catholic religion, also accused those who claim that Islam promotes injustice and violence , to take part in ideological manipulation.

«However, is it not also the case that often it is the ideological manipulation of religion, sometimes for political ends, that is the real catalyst for tension and division, and at times even violence in society».

The Pope had the following message of unity:


«Muslims and Christians, precisely because of the burden of our common history so often marked by misunderstanding, must today strive to be known and recognized as worshippers of God faithful to prayer, eager to uphold and live by the Almighty’s decrees, merciful and compassionate, consistent in bearing witness to all that is true and good, and ever mindful of the common origin and dignity of all human persons, who remain at the apex of God’s creative design for the world and for history».

Source: The Papal speech in The Mosque al-Hussein bin Talal – Amman Saturday, 9 May 2009

8 thoughts on “The Pope deleted the Jewish Messiah in Jordan”