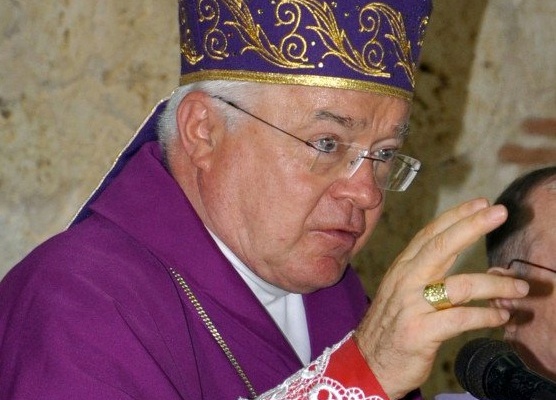 Former archbishop Jozef Wesolowski is charged with child sex offences. His Vatican trial has been adjourned after he fell ill.

Jozef Wesolowski, 66, is accused of paying for sex with children in the Dominican Republic from 2008-2013.
He is being treated in intensive care for an unspecified illness.

Wesolowski is the first high-ranking Catholic to stand trial in the Vatican on sex abuse charges. He is also charged with possession of child pornography.

If convicted, he could face between six and 10 years in a Vatican jail.

Pope Francis has overhauled the Vatican’s justice system to allow bishops to be tried in the Papal state, after the church was accused of not doing enough to tackle sex crimes against children.

All Roman Catholic priests have to give an oat to be loyal to the Bishop of Rome. Regardless of whatever. The Pope is their untouchable leader, the very infallible “Holy Father”.

The present Pope has claimed the ladders of authority. He has been an alter boy, priest, bishop, archbishop and eventually the cardinal of Argentina. Francis have given a similar oat, like all other priests.  He will have to remain loyal to the institutions of the Roman Catholic Church. It is consider a grave sin, and an act of disloyalty, to talk against an order brother.

To let a Catholic priest conduct a trial of the crimes of another Catholic priest, is therefore a sure way to pervert justice. The Vatican court is a kangaroo court, where the raped alter boys can never get justice.

For decades criminal priests have been taken away from the nation’s where their crimes have been committed, and literally hidden in the Vatican.  The Home minister of the Papal state have delayed and denied justice, by refusing to give various public persecutors the concerned documentation that incriminates the clergy.

That the Vatican has a lock up, a prison, is a joke. But a brilliant example of the Pope acting a a wordily King.

Where was the prison, where Jesus the Messiah locked up his defaulting disciples?

When did the Messiah call his disciples to build an eartly kingdom?

Zechariah 7:9
“Thus says the Lord of hosts: ‘Execute true justice, Show mercy and compassion Everyone to his brother.

The Pope is an essential player and ruler in the kingdom of the world. He is the head of a nation. He is the highest authority, with diplomatic immunity.  The Pope also claim to be the leader of the global church of Jesus the Messiah.

Eternal shame, agony and pain awaits all who accept the claimed authority of the head of the Vatican.

May Jesus the Messiah have mercy on all decived souls. Amen.