Very, very interesting. 21st of August 2019: Trump liked to be called the “King of Israel”, and he tweeted thanks to the commentor who claimed Trump is hailed in Israel as ” the second coming of God”.

Take a minute to look at this amazing video:

The Bible says that out of the mouth comes what the heart is full of. Just look what Trump has tweeted as a respons to this video: . 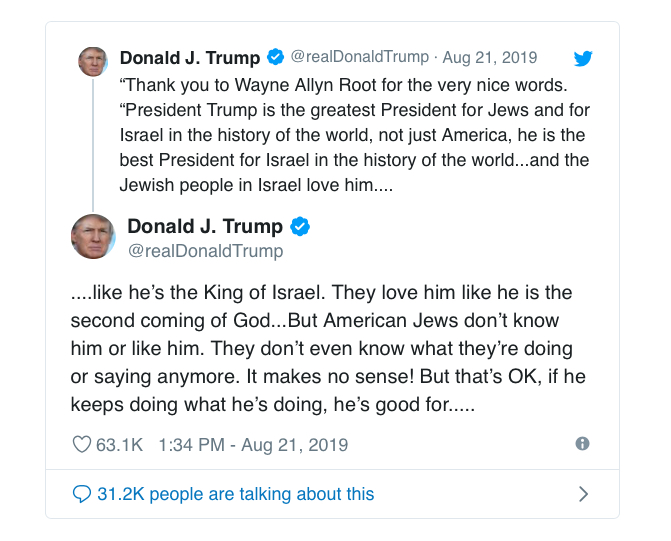 The state of Israel will surely not be betrayed by an enemy, when the final antichrist takes them for a ride. But by someone recognized as a true friend. Lets wait and see what there is in Trump’s upcomming final sollution that shall bring peace to the Jewish state.

“The king will do as he pleases. He will exalt and magnify himself above every god and will say unheard-of things against the God of gods. He will be successful until the time of wrath is completed, for what has been determined must take place. He will show no regard for the gods of his ancestors or for the one desired by women, nor will he regard any god, but will exalt himself above them all. Instead of them, he will honor a god of fortresses; a god unknown to his ancestors he will honor with gold and silver, with precious stones and costly gifts.  He will attack the mightiest fortresses with the help of a foreign god and will greatly honor those who acknowledge him. He will make them rulers over many people and will distribute the land at a price.

It is to early to say if Donald Trump is the last and final man of lawlessness.  But there are many factors that makes him a brilliant candidate. Trump fits into many verses in the book of Daniel 9-11, 2. Tess, 2 and the book of Revelation chapter 11.

Trump’s nature and character seems to fit well. There are not many World leaders that would ever utter that he is the best candidate fot the Nobel Price for peace?

May Jesus the Messiah reveal to us the truth. Amen.