This is not a quick take from a boxing club in Queens, New York City. This is inside the Parliament in Kiev in Ukraine in May 2010.

The World is fast erupting into merciless violence. Few of us gets surprised about riots in the streets. Every minute, somewhere on Earth “peace activists” and Police battling it out. Some still pay attention when the media reports on fresh mass murders or slaughter of innocent children.

There is no end of wars. Not a single second of peace all over the Earth.

The pictures you are about to see, are not taken among the goons in a downtown nightclub. Neither from a boxing match. These are the ugly images of elected politicians fighting tooth and nails inside of National Parliaments.

You might be surprised what kind of Republics and Kingdom, that have fallen into the club of failed nations.

John 13:35
By this everyone will know that you are my disciples, if you love one another.”

Genesis 6:5-7
The LORD saw how great the wickedness of the human race had become on the earth, and that every inclination of the thoughts of the human heart was only evil all the time.

The LORD regretted that he had made human beings on the earth, and his heart was deeply troubled. So the LORD said,

“I will wipe from the face of the earth the human race I have created—and with them the animals, the birds and the creatures that move along the ground—for I regret that I have made them.”

Could it be, that we are exactly in the same situation today, just as it was before the flood?

We have been told is is bad on North Korea. But how healthy are the leaders, inside one of the major allied countries of America in Asia?

To be an expert in Judo, seems to be no disadvantage for a Koran man with political ambitions.

Is there still anyone who remember what excuse Hitler needed, to grab power in Germany?

After World War II, we have been told that Japan is a peaceful corner of the Globe. With a noble culture, where elders respect each others.

Proverbs 6:18
a heart that devises wicked schemes, feet that are quick to rush into evil.

We have been told that Taiwan is one of the nations in Asia, that secure freedom and democracy. Another major ally of America, stand tough against communist China. 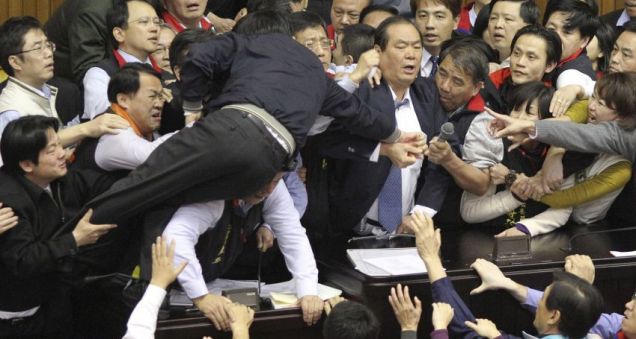 Jeremiah 17:9
“ The heart is deceitful above all things,And desperately wicked; Who can know it”.

The Latino politicians are suppose to be good Catholics. Still there seems to be no peace in their heart, even after they have been elected to serve the people.

Matthew 24:21
For then there will be great distress, unequaled from the beginning of the world until now—and never to be equaled again.

Turkey is a member of NATO, and is proposed to become a member of the European Union. But are we sure the Turks are able to get into any Gentlemen agreements? 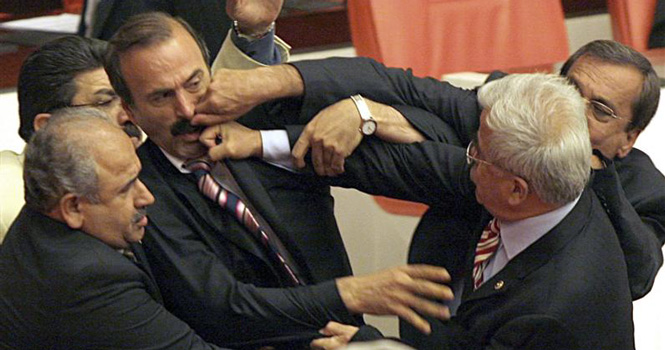 Italy is in the heart of the European Union, and claim to be the cradle of modern civilization. But could it be that the Italians are just as wicked as the rest of mankind?

Knesset in Israel is normally a place ruled by ladies and gentlemen. But the Jews and Israeli Arabs do not always limit their actions during disagreements.

India has the World record in adjournments in parliament business, due to brawls and screaming politicians. Sometimes they even hit each other with chapels .

There is no longer business as usual in Somalia. But the last picture is an example of hard core political disagreement.

Even inside the Parliament in the Green Zone in Baghdad, no one seems to be safe from political disputes.

In many “parliaments” there has never been a brawl. There is simply no freedom, not even to fight. Like in China, Saudi Arabia, Damascus, and Sudan.

There can never be peace on Earth, without the Price of Peace, Jesus the Messiah present. Behold. He will soon be back. Till than. Learn from the wisdom of Jewish King David:

Blessed is the one who does not walk in step with the wicked or stand in the way that sinners take or sit in the company of mockers, but whose delight is in the law of the LORD, and who meditates on his law day and night.

That person is like a tree planted by streams of water, which yields its fruit in season and whose leaf does not wither— whatever they do prospers.

12 thoughts on “See how they love one another”