Australian Cardinal Pell has testified in court accused of abusing up to 10 altar boys. The local Catholic order brothers spied on the victims in the group “Broken rites”.

Cardinal George Pell denied the claims that he had abused between five and 10 boys, taken to court after an investigation by the police in the state of Victoria in Australia.

“The allegations are without foundation and are utterly false,” read the statement published by The Australian that night. “The timing of these leaks is clearly designed to do maximum damage to the cardinal and the Catholic Church and undermines the work of the royal commission.”

Then again, the church’s history on the handling of sex abuse is often beyond belief.
There was barely a ripple this week when the commission heard how the Christian Brothers hired a private investigator in 1995 to gather evidence to investigate victims of a pedophile priest and to gain intelligence on victims’ group Broken Rites.

The Christian Brothers used the PI to help defend Brother Ted Dowlan, who was convicted in 1996 of 16 counts of indecent assault against 11 boys at four schools run by the order.

Read more about the sex crimes of the Roman Catholic priesthood:

This article was published on News That Matters, 13th of November 2012: 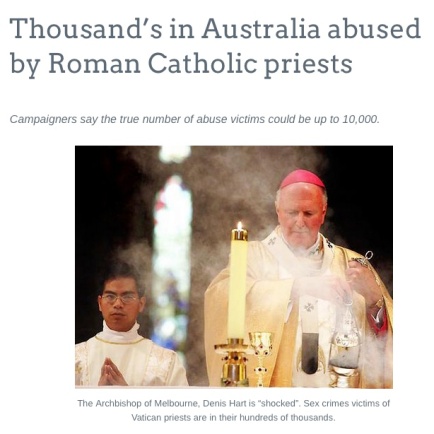 Anyone is presumed not guilty, to proven guilty in court. But the sexual abuse by Roman Catholic priests is a pandemic, and expose systemematic and institutional promoted sodomi.

I have published several reports exposing the Vatican state as a syndicate of criminals. The seat of the Bishop of Rome has been like this, since 1929. That was the year fascist dictator Benito Mussolini gifted the Vatican statehood to the Pope.

What are the benefits gifted to criminals ordained as priests?

You can conduct your criminal activities, supported by the United Nations (UN), claiming protection. You can come under the cover of International agreements securing freedom of religion.

The Roman Catholic priesthood do maximum damage to the Christian faith. Simply by being branded by many Christians as a part of the Christian family. The name of Jesus the Messiah is dragged into the gutter, by a priesthood that is not grounded in Biblical Truth. The priests, bishops and cardinals obey the Pope, and all his demonic inspired dogmas and erroneous doctrines.

Matthew 7:15
Watch out for false prophets. They come to you in sheep’s clothing, but inwardly they are ferocious wolves.

One of Romes doctrines, attract homosexuals and pedophiles. The Roman Catholic priests are refused mariage, and are denied a normal sex life. Therefore they lust after fellow priests, and even rape alter boys under the cover of darkness. Sodomy is widespread, and it is covered up.

The Bible says Satan is most destrcutive when he appears as an angel of light. The Roman Catholic Church has a “Christ” in its center. But this idol is a satanic copycat, who can not save a single soul. The RCC takes its parishioners down the path towards destruction. The head of this fraudulent religious movement is the pagan Queen of Heaven, and her son. Falsely claimed to be Jesus the Messiah.

If you what to escape the everlasting fire, you must not support this “Church”. But rather continue to expose and resist all her evils.

May Jesus the Messiah have mercy on all deceived souls. Amen.

7 thoughts on “Cardinal Pell accused of being a pedophile”

The World of the Banjararaja.com

DOWNLOAD my book on the origin of the Gor Banjara tribe