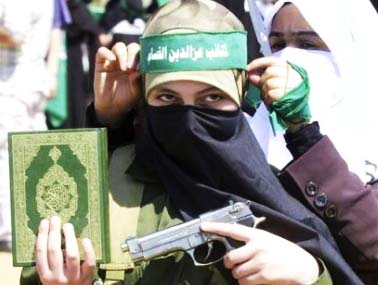 Israeli teachers expose the educational work of the PLO as “terror glorification.”

An Israeli teachers’ association will present a comprehensive report about anti-Semitic and anti-Zionist education in Palestinian Authority schools, at a global education conference that opened on Tuesday.

The Association of Secondary School Teachers in Israel, in partnership with the group Palestinian Media Watch – which monitors and analyzes the PA through its media and schoolbooks – is set to present the 57-page report at the Education International World Congress.

In the foreword of the document, the association writes that “the PA teaches its children to reject Israel’s right to exist, encourages them to view Jews as evil and directs them to embrace terrorist murderers as role models.”

It also accuses the PA of depriving their own children of a peaceful future.

The report, which Palestinian Media Watch compiled, includes a detailed list of examples of Palestinian children’s exposure to what the monitor group’s director, Itamar Marcus, has called “terror glorification.”

When the anti-Jewish Nazi regime fell in Berlin in may 1945, the allied forces removed any symbol and sign of the ideology of Hitler. Germany literally had to be de-Nazified.

The same anti-Jewish hatred is being sponsored by the London and Berlin today. But the neo-Nazi camp has been shifted from the streets of Europe, to the mountains of Zion.

The anti-Jewish campaigners are not only found in the Muslim and secular camps. Anti-Zionism is promoted in protestant Churches all over the world. If the Jewish people and Israel are mentioned at all,  claimed to be Christians preach that God has no business left with the Jewish people.  Because they “killed Christ”, he only work through the church.

Balaam corrected his ways. Will you be able to do?

Now when Balaam saw that it pleased the Lord to bless Israel, he did not resort to divination as at other times, but turned his face toward the wilderness.

Not all will be able. For many protestant preachers, the existence of Israel is troublesome. It would have been better for peaceful coexistence, if the Jewish state had been revoked, and become like all other nations.  Claimed to be followers of the Messiah walk right into the errors of Balaam, and accepts theological bribes as a part of a global bid to renounce Israel.

Unfortunately, not all who say “Lord, Lord” will make it to the kingdom of heaven. As explained in Matthew 7: 21-23.  Many who claim to know the Messiah, do not know Him at all. Not as God of the Hebrews, God of Abraham, Isaac and Israel. The God of Shem.

Watch out, so that no one deceive you. Read the Bible, and come to know the Messiah who will reign over the House of Jacob forever.  The Lion of Judah is the King eternal, who will save Jews and gentiles who accepts His offer of atonement for sins.  He defeated Satan on the cross, gaining eternal forgiveness of sins by shedding His own blood.

After three days, the Yeshua the Messiah rose form Sheol, the Hebrew word for the tomb of silence. He rose from the dead for our justification. Today the Messiah invites us to walk  in the power of His resurrection. To rise, shine and live to His glory. Amen.

The same Messiah will cast billions of His enemis into the everlasting fire of Hell. Do not place your self under jugdment.  Do not participate in the wickedness of those who support the PLO. Nor must you support any other Islamic terror-organization or anti-Zionist religious assembly.