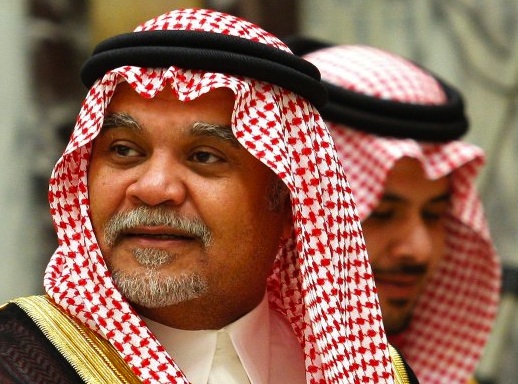 Iran’s nuclear deal will allow it to get an atomic bomb and “wreak havoc in the region”.

These are the words of Saudi Arabia’s Prince Bandar bin Sultan. He is a former head of the kingdom’s intelligence services and its veteran ambassador to Washington. Bandar said Iran’s nuclear deal will allow it to get an atomic bomb and “wreak havoc in the region”.

Writing in Lebanon’s Daily Star on Thursday, Bandar, who left office a year ago after orchestrating Saudi aid for Syrian rebels against Iran-backed President Bashar Assad, said that Arabs were now turning away from the United States.

“People in my region now are relying on God’s will and consolidating their local capabilities and analysis with everybody else except our oldest and most powerful ally,” he said in the opinion piece.

Prince Bandar says what all Sunni Arabs feel.  President Obama is a double faced hypocritical liar. He talks about “peace” in the Middle East, while granting fuel to the Iranian regime. The US has secured enough money and firepower to the totalitarian Ayatollah’s, to set the whole region ablaze.

100 billions USD will be made availbale to the regime in the Middle East, who is the largest global sponsor of Islamic terrorism. Its domain includes 40.000 rockets placed on the borders of Israel by Hezb’Allah and the Hamas. This is the fruit of monumental evil, not seen on Earth since the rise of Nazi-Germany.

The civil war in the Islamic camp not only continue.  The barbarians will gain momentum, and create more panic and chaos. The Sunni Muslims account for 90 per cent of the Muslims in the Middle East. To be able to counter nuclear terror from the Shia camp, the Sunnis will start to develop their own bomb.

Israel can simply not sit quiet and see their enemies of different Islamic sects and colors achieve nuclear arms. As we see the downfall of US supremacy, the Jewish state will have to look after its own security.  A massive regional war in the Middle East now seems unavoidable.

All who makes profit from wars and death will rejoice with Obama and the apostate world elite. They will have their party for some time.  They will reign and rule the Earth for a few years. Because out of the chaos, up from their midsts the last and final antichrist will emerge. A man of lawlessness who will be killed by the splendor of the returning Messiah.

Then one of the elders said to me, “Do not weep! See, the Lion of the tribe of Judah, the Root of David, has triumphed. He is able to open the scroll and its seven seals.”

No believer have to be alarmed. All who have accepted the Word of God, knows that there will be a happy ending. For all who believe, trust and obey the Lion of Judah, will enjoy eternal life inside the Kingdom of Heaven.  Amen.

Those who have rejected Him, better read what the Bible says about their final destiny:

Revelation 20:10
And the devil, who deceived them, was thrown into the lake of burning sulfur, where the beast and the false prophet had been thrown. They will be tormented day and night for ever and ever.