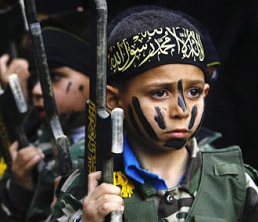 Official PA daily:
“What was taken by force, can only be restored by force”

Israel is
“So-called ‘Israel’… the occupation state… the Zionist entity”

Fatah with picture of rockets:
“We will confront our Zionist enemy”

The camp’s closing ceremony, in which the campers paraded and danced in military garb with rifles, was attended by PA and Fatah officials, among them Nablus District Governor Akram Rajoub, Secretary of Fatah’s Nablus branch Jihad Ramadan, and representatives of the PA National Security Forces. [Fatah-run Awdah TV, June 12, 2015]

The evils of the Pope recognizing “Palestine” can best be exposed by al-Fatha preparing their own children to become killers of Jews and suicide bombers.

The Arabs basically kill their own children, and bid to put the blame on Jews. In a bid to demonize and eventuelly remove the state of Israel.

When an Arab gets eight or ten children, at least one son must become a mass murderer for “allah”. A shahid, or in English. ” a martyr”.

The Pope knows this. Still he support Islamic Jihad.

2 Thessalonians 2:5-10
Do you not remember that when I was still with you I told you these things?  And now you know what is restraining, that he may be revealed in his own time. For the mystery of lawlessness is already at work; only He who now restrains will do so until He is taken out of the way. And then the lawless one will be revealed, whom the Lord will consume with the breath of His mouth and destroy with the brightness of His coming. The coming of the lawless one is according to the working of Satan, with all power, signs, and lying wonders,  and with all unrighteous deception among those who perish, because they did not receive the love of the truth, that they might be saved.

The real motive of the papacy, is his desire to gain the Temple Mount, and be elevated by all men at this site.  Today, the Pope is not able to set up his throne on the site of the two ancient temples, not able to be hailed as “The Holy Father” and “prince of peace”.

The Bible speaks about such a man of lawlessness. A blasphemous global leader who mock God, using the name of “Christ”. He will set him self up in God’s temple, and claim to be God.

Renounce the Pope-PLO nexus. It is evil to its core, and an international backed movement of soldier’s for “allah”. Trash the “Christ of Rome”, and embrace the true Messiah. Surrender to Jesus of the Bible.

One thought on “The Pope, the PLO and continued jihad”