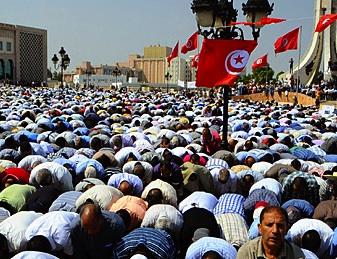 Tunisia plans within a week to close down 80 mosques, that remain outside state control, for inciting violence.

This will be done as a countermeasure after the hotel attack that killed dozens, Prime Minister Habib Essid said on Friday.The announcement came after a gunman opened fire on a tourist resort hotel in Sousse city, south of the capital.

United Nations (UN) continue to support totalitarian ideologies. They are protected by the UN charter, hidden behind the principle of “freedom for religions”.

One of these protected, violent and suppressive ideologies is Koran based Islam.

When a Muslim nation like Tunisia is about to close 80 Mosques, all civilized nations need to pay attention.

What about the mosques in cities like London and Paris?

How many dead European citizens will it take before France and UK follow the example of Tunisia?

How much blood of Europeans will have to flow, before we will see a popular revolt against the apprehensive attitude of our political leaders?

Why do Europe has to be brought down the same path of destruction, as Syria, Nigeria. Iraq, Somalia, Pakistan, Afghanistan, Yemen, Lebanon and Egypt?

There are already 40 million Muslims in Europe, most of them immigrants. The majority of them live on social security, and send money to pro-Jihadi organizations in their country of origin.

Koran based Islam has got a foothold in Europe, and it is expanding rapidly. If the influx of Islam into Europe is not stopped, the civil wars of Islam will eventually spill over into the European continent.

Unfortunately, there will be no happy ending for Europe. This post-Christian continent will be brought to the slaughterhouse, once again. Because our secular, humanist leaders continue to display how they hate God of the Bible.

The candlestand has been removed. The age of grace is about to end, as we enter the age of judgment. Let all who believe in Him put their trust in the eternal judge, the incoming Jesus Messiah.

Muhammad was a liar, who has brought a curse up on his followers. Muhammad accepted the message of a demon who proclaimed that God has no Son, who is eternally God.

For God so loved the world that he gave his one and only Son, that whoever believes in him shall not perish but have eternal life.

Jesus the Messiah is the Son of God. Amen.