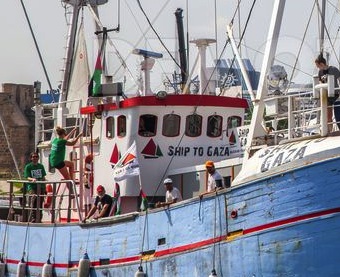 The Marianne of Gothenburg hopes to reach Gaza to bring Swedish supplied to the Islamic terror group Hamas.

A flotilla carrying pro-Palestinian activists is heading to Crete en route to the Gaza Strip in a bid to break the Israeli and Egyptian-imposed blockade on the Palestinian enclave.

The Marianne of Gothenburg, a Scandinavian fishing boat, traveled from Sweden through the waters of Norway, Germany, France, Spain and Portugal before reaching Messina, Italy, last week.

The short stop in Messina was an intensive one with meetings with peace activists and a press conference at the city hall,” the group noted on its website.

On board the ship are Swedish journalist Kajsa Ekis Ekman, Swedish-Israeli composer Dror Feiler, Spanish Member of the European Parliament Ana Maria Miranda Paza, and others.

The activists say the vessels are carrying a cargo of solar panels and medical supplies for Gaza residents, who are still recovering from last summer’s Operation Protective Edge, and expect to reach the Strip by the end of the month, unless they are intercepted.

Activists told al-Jazeera that they have a “strict nonviolence policy” and would not attempt to use force against the Israeli Navy should they be intercepted in international waters or beyond.

I am pretty sure that the Israeli naval commanders will not loose their sleep over this Swedish stunt to intimidate the state of Israel.

This small fishing boat do display that shameless Scandinavians do not mind doing the dirty work of the sons of Muhammad.

Why supply the Hamas?

Why not dock in Syria, and give the Islamic state (ISIL) a helping hand?

Since the killers of Muhammad see no borders, but rather desire to knock them down, and establish a new Caliphate?

Let us pray that the heads of these Scandinavians are not chopped off as they sail towards a territory held by Islamic terrorists. Let us pray that the Israeli navy comes to their rescue at the high seas, and abruptly stop this senseless foolishness.

May Jesus the Messiah have mercy on all these lost souls. Amen.