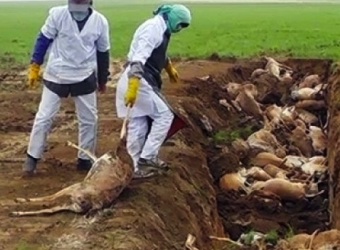 More than 120,000 rare saiga antelopes — more than a third of the total global population has perished.

The sudden deaths of tens of thousands of endangered antelopes in Kazakhstan over the past two weeks have left scientists scrambling for answers and conservationists worried about the animal’s future.

More than 120,000 rare saiga antelopes — more than a third of the total global population — have been wiped out in a devastating blow that the United Nations Environment Programme has called “catastrophic”.

Scientists are struggling to put their finger on the exact nature of the disease that has felled entire herds, but say findings point towards an infectious disease caused by various bacteria.

Kazakhstan’s prime minister Karim Massimov has set up a working group including international experts to establish reasons for the deaths and oversee disinfection of lands in the three regions where the saiga died.

UN experts said the mass deaths come down to “a combination of biological and environmental factors”.

This is a parallell picture of what will take place inside the Great Tribulation. Also one third of the humans will perish when the wrath of God reaches its peak.

Are you one of the fools who have rejected the Word of God? Please pay attention.

Revelation 9:15
And the four angels who had been kept ready for this very hour and day and month and year were released to kill a third of mankind.

All those who have made Satan their Lord will not repent, even when they see such catastropic events. They have been told that Satan is the power behind this wrath, and that the true “god” can be found in their mute idols. They cling to the messages of their false teachers, and believe that their idols will protect them.

Revelation 9:20
The rest of mankind who were not killed by these plagues still did not repent of the work of their hands; they did not stop worshiping demons, and idols of gold, silver, bronze, stone and wood—idols that cannot see or hear or walk.

Are you concerned about what will happen to your own soul?

Will you escape the coming judgment?

Are you still worshiping idols of mortal men or “gods”, made of stone and wood?

Or have you repented from your sins, and accepted Jesus the Messiah as your Lord and God?

If not. You too will perish.