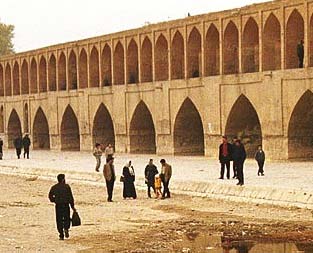 In parts of Iran there has been no rain for 14 years. In Tehran the ground water is almost finished.

Signs of the drought in Iran — which, according to experts, has lasted for more than two decades — are not very visible in the capital. There are many parks and trees because of the active city government.

The reasons for Isfahan’s water crisis are many, but trouble began with a severe drought in 1999 that gripped large parts of the country. In the Isfahan region, the drought worsened in 2008 and persists to this day. This difficult but manageable situation was made far worse by political mismanagement.

Under former President Mahmoud Ahmadinejad, who held power from 2005 to 2013, the government took control of the watershed away from a unified water authority and split it among the self-serving leaders of the provinces it flowed through, who assigned the water for use in agriculture, industry and for domestic consumption without regard for protecting its supply. This was a politically motivated decision that proved popular in the short run but created damaging competition for a scarce resource.

Nowhere is the drought more visible than in Iran’s former capital, Isfahan, a desert city 250 miles south of here. It is home to a once mighty river, the Zayanderud, or the River of Life, that cuts through the historic center like a clumsily rolled out carpet.

But Isfahan’s plight is just one example of a water crisis in a country gripped by 14 successive years of drought. Iran is hardly alone in facing a water shortage but its problems are acute. A growing population and shrinking economy make the situation difficult, but its position at the centre of a politically unstable region where competition for water is intense makes it dangerously volatile.

When Obama wants to lift the trade embargo on Iran, he comes to the rescue of the Ayatollah regime.

Because of their constant issues of curses against Israel, a curse has fallen on all Iranians. There is simply no rains from the heavens.

The solution to this problem is found in the Bible. The moment you start to bless the Jewish people, you will receive blessings.

I will bless those who bless you, and whoever curses you I will curse; and all peoples on earth will be blessed through you.”

Obama is not a part of the solutions for the Iranians. He is a part of the problem. Because when turbo-capitalists and investment bankers enter Tehran, they will simply secure the totalitarian forces. Just like the capitalists have done to help the communist regime in Beijing.

1 Timothy 6:10
For the love of money is a root of all kinds of evil. Some people, eager for money, have wandered from the faith and pierced themselves with many griefs.

Forget about Uncle Sam having any royal motive behind their New Age approach towards the ruling Muslim Priests in Teheran. It is all about the love in money, the roots of all kinds of evils. Also Islam.
Islam is less a religion, but more of a political ideology that aim for world control. A few selected sons of Muhammad shall rule in the name of “allah”. A small priestly class of Muslims control the political powers and all the cash. They have cursed their own people, and left the large majority in endless trouble and misery.
Written by Ivar

4 thoughts on “Iran is completely dried up”