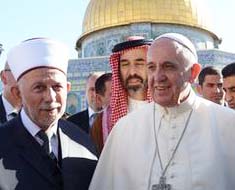 Followers of both the Catholic and Islamic religions chant prayers. The Pope pray to the Son of Mary, honored in the Koran.

Pope Francis will visit the Pontifical Shrine of the Blessed Virgin of the Rosary of Pompeii during his trip to the Italian region of Campania next year.

The visit will be the first stop during the Holy Father’s Apostolic trip to Naples on March 21st, 2015. Cardinal Crescenzio Sepe, the archbishop of Naples, first announced the Pope’s visit in September on the Feast of St. Januarius.

It is interesting that the Pope’s future chants of the rosary to the Queen of Heaven of Pompeei, was announced by a Cardinal on the feast of “St. Januarius”.

The word  “Januarius” is the ancient latin name for a month that looks forward to the Future and Backward to the Past. The name (Ianuarius in Latin) is derived from the two-faced Roman god Janus.

There are a lot of two faced people around. Like in the Society of Jesus. These Roman Catholic Order brothers called Jesuits  claims to represent Jesus of the Bible. But they chant prayers to their paganized copy of their mother of “Christ”, the “Queen of Heaven”.  She is also presented as the mother of their Church.

Be aware than even Muslims consider “Mary” the greatest of all women. Furthermore, Muhammad is reported to have said that Mary reached the «level of perfection».

Here are some more pictures that expose the Catholic-Islamic nexus of chanting prayers:

The Pope chant rosary to the claimed “Queen of Heaven”. Her son is branded in both Catholicism and Islam, as the “son of Mary”.  In both religions this deity is presented as the perfection. Just like the ancient queens of heaven, Semiramis and Isis, two babylonian deities.  They are also called by the pagans as “mother of god’s”.

Both religion have deleted the Jewishness of the mother of Messiah. They do not acknowledge God of  the Hebrews, the God of Abraham, Isaac and Israel.

By chanting prayer to a paganized copy of a young Jewish lady, they do serve the same deity. But this deity is not God of the Bible, but the ancient serpent that deceived Adam and Eve in the Garden of Eden.  Since this first acts of deception and disobedience, Satan surely have managed to make many people serve him as their “Lord”.

All religions that do not acknowledge both the uniq deity and humanity of Jesus the Messiah, present to us a copy cat. The Bible calls such persons antichrists.

Jesus the Messiah was given flesh, by a young Jewish woman, a virgin. She was a decedent of Jewish King David. Her family three is of the blood line of the Jewish tribe of Judah. Acknowledging who the Messiah is, many Jews welcomed him shouting “The son of David”.

Only the Messiah can save a human being from his sins. The Messiah will return as the Lion of Judah, the root of David:

Then one of the elders said to me, ‘Do not weep! See, the Lion of the tribe of Judah, the Root of David, has triumphed. He is able to open the scroll and its seven seals.’

All other “Christ’s” are mortal copycats. The True Messiah warned us to be on our guards against them.  The copycats will lead their followers towards the wide gates of destruction. Many of them with a chanting prayer chain in their hands.

He replied: ‘Watch out that you are not deceived. For many will come in my name, claiming, “I am he,” and, “The time is near.” Do not follow them.

The scriptures explain to us the family line, character, nature and uniqueness of the Messiah.

Are you one of the people who have been deceived to follow a copy cat?