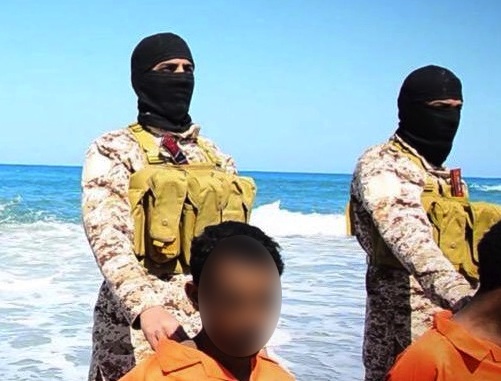 Islamic State has posted a video of shooting and beheading of 30 Ethiopian Christians in Libya.

Reuters was not able to verify the authenticity of the video but the killings resemble past violence carried out by Islamic State, an ultra-hardline group which has expanded its reach from strongholds in Iraq and Syria to conflict-ridden Libya.

The video, in which militants call Christians “crusaders” who are out to kill Muslims, showed about 15 men being beheaded on a beach and another group of the same size, in an area of shrubland, being shot in the head.

Both groups of men are referred to in a subtitle as “worshippers of the cross belonging to the hostile Ethiopian church”.

Ethiopia said it had not been able to verify whether the people shown in the video were its citizens.

“Nonetheless, the Ethiopian government condemns the atrocious act,” government spokesman Redwan Hussein said. He said Ethiopia, which does not have an embassy in Libya, would help repatriate Ethiopians if they wanted to leave Libya.

The Islamic state claim that Christian leaders were behind the slaughter of Muslims in Iraq during the Gulf war.
This claim is based on a misunderstanding.

Former US President George W. Bush and Tony Blair might be religious, and even claim to be “Christians”. But they have never been followers of Jesus the Messiah.

“You have heard that it was said, ‘You shall love your neighbor and hate your enemy.’ But I say to you, love your enemies, bless those who curse you, do good to those who hate you, and pray for those who spitefully use you and persecute you,that you may be sons of your Father in heaven;

Regardless of the crimes done by Western nations against Arab nations. When the Islamic state beheads and crucify local Christians as a act of revenge, they kill people who have done them no wrong.  What we see is barbaric, horrible acts done by followers of Satan.

True followers of Jesus the Messiah do no harm to others. Neither do they rob other nations oil resources, nor do they kill to achieve economical gains.

I am able to understand that many Muslims do not see the difference between false and true Christianity. But I fail to understand why claimed to be Christians can not tell the difference between right and wrong.  My best guess if that they do not read the Bible, or simply do not believe what they read.  Some pastors might have told them not to “judge”.