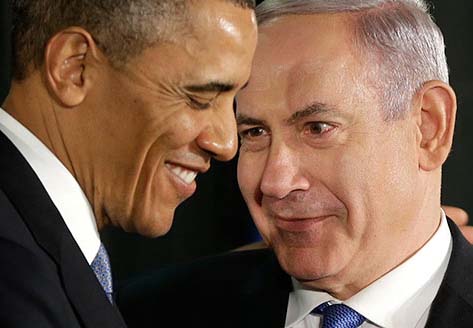 With 81 per cent of votes counted, Likud holds seven-seat lead over Zionist Union.

With 81 percent of precincts reporting before dawn on Wednesday, the Likud holds a seven-seat edge over Zionist Union.

According to the official up-to-the-minute tally, Likud wins 31 seats while Zionist Union comes in second at 24 seats.

When the PLO started to interfere in the Israeli election, it was just but enough for the Israeli voters.

On the last day of the campaign, the electorate understood that they were subject to an Obama lead campaign to oust Benjamin Netanyahu as the Prime Minister of Israel.

The people of Israel has again voted for security, and told all foreigners to keep their hands of Israel.  The present right wing economics in painful for 45 per cent of the voters who do not endorse Netanyahu. But for all Israelies an attack from from Islamic state or Hamas will be devastating. It is anyday better with Netanyahu, than to trust those who excuse or silently support Islamic Jihad.

Let us pray that Netanyahu will keep his latests promise of not endorsing a “Palestinian state”. Let us also continue to support the democratic state of Israel, and rebuke all attempt to abolish Zionism from this land. May Jesus the Messiah bless the Jewish people, and make them understand He is the Messiah.