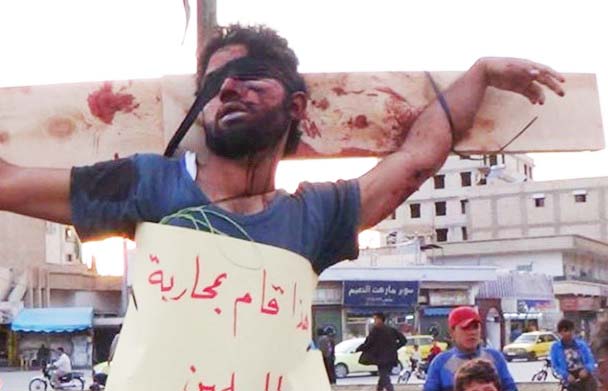 All right, it might not start until 2016, these things can be awfully hard to predict exactly. However, surprising as it may seem, one way or another the end of ISIS is in sight, and it’s all resting securely in the hands of Jesus, peace be upon him.  At the same time, mainstream orthodox Muslim websites are already predicting Jesus’ return as early as 2022, starting an Islamic prophetic clock set to run over the next 7 years, in the purportedly rapidly approaching run-up to Armageddon.

The good news is that even if they’re wrong, those claims ISIS is making about their own role in Islamic end-time prophecy spell their own certain end. Because even though ISIS claims they’re fighting on the side of the angels, it’s obvious they’re not, and it should become progressively clearer to even the most misguided Jihadi that either ISIS is wrong about Armageddon or that they’re on the wrong side, because of all the things Muslims know are supposed to happen.

And if it turns out they’re right, then we can all rest assured that by the time the dust has finally settled there will be no question left about who’s side they are really on, because it’s all going to be about Jesus.

Frankly, although I’d like to believe the orthodox predictions are correct, I think they’re premature, and that ISIS is crazy-stupid.

But even if we considered that they might be right about the impending apocalypse, what sort of events should the next few years bring according to confirmed Islamic eschatology?

•    First, the Euphrates River should soon be uncovering a mountain of gold, with the Arabian Peninsula becoming filled with meadows and rivers.
•    Then, some Muslims throughout the world will be inexplicably transformed into apes and pigs because of their attempts to make lawful some rather significant major sins. Personally, I think that one’s aimed squarely at al Qaeda, Boko Haram, Al Shabab and ISIS and their associates, and their rather liberal views regarding murder, tumult, oppression and slavery.
•    Then shortly thereafter you can expect the coming of the Mahdi, his uncovering of the Ark of the Covenant and his evangelism of a significant proportion of the world’s Jews, who will wake up and realize that they shouldn’t be ignoring and allowing Israel’s oppressing Muslims and Christians in Palestine.
•    Then, you will see the coming of al-Masih ad-Dajjal –the false Messiah or anti-Christ– the descent of ‘Isa ibn Maryam [‘alayhis-salam] –that’s Jesus– and his defeat of the anti-Christ followed by the coming of Ya’juj and Ma’juj –Gog and Magog–,followed by:
•    The rising of the sun from the west
•    The appearance of the Beast of the Earth
•    The wind that will take the souls of the believers
•    The ruin of al-Madinah –Medina–
•    The destruction of the Ka’bah –Mecca– by the Abyssinians
•    And the fire that will come from the Yemen to gather the people in Sham before the coming of Judgement Day.

But if it does come true, what sort of a man is the Mahdi supposed to be?

Muslim prophecies are actually frighteningly clear, and do seem to predict the current state of affairs in the Levant, hold out hope for the rest of us and promise an end to ISIS.

Then, Allah [‘azza wa-jall] will send a man from my descendents who will fill the earth with equity and justice as it had been filled with oppression and tyranny. The inhabitants of the heavens and the earth will be pleased with him. The earth will not withhold any of its growth, but will bring it out, neither will the sky withhold a drop, but Allah will pour it out upon them in showers. He will live among them for seven years, or eight, or nine. The living will wish that the dead were brought to life again to witness the great good that Allah brought about for the people of the earth.

And what about Jesus?

Even though Muslims and Christians disagree about what he is, with Christians claiming he’s God and Muslims declaring he’s not, everybody agrees about what sort of a person he was, is and will be: a man who fulfilled the Jewish Covenant and taught benevolent compassion to his followers, his example remaining a source of hope and inspiration to all humankind for the rest of time.

Bottom line, I have served God and loved Jesus my entire life, and I followed Jesus into Islam when I realized I became a worse man by worshipping Him and a better man by following him.

And my greatest hope for today is that Muslims and Christians are all starting to look forward to his return, because regardless of when that happens his example and his words can guide all of us to a better place together, with the help of God.

Because regardless of what the next years bring or which faith we follow, we are all waking up and realizing that we all need Jesus, peace be upon him.

As I have stated many times: The Muslims will end up in the wrong camp. They will worship the final antichrist. They already worship the spirit of antichrist, by rejecting that Jesus is God.

ISIL just do what the Muslims have always done. Bidding to get did of all true followes of Jesus the Messiah.

The sons of Muhammad have been a teror in Arabia, North Africa and Asia since 620 A.D.  The worst massacres of Christians in modern times, took place inside todays Turky in 1915. 1,5 million Armenian were brutally slaughtered the same way ISIL slaughter people inside Iraq and Syria. The Armenian Christians were beheaded by the Muslims, and many Christians were crucified.

To get it right, this Canadian convert to Islam must do a radical change in his views. Wherever he has written “Jesus”, he must put in the word “antichrist”. Next, he must repent from his lies and wickedness. and accept Jesus as his God and saviour.

The Muslims believe that “Jesus” must come first, and than the antichrist will appear.  The Islamic “Masih ad-Dajjal”. If the Muslims had opened their Bible, and read Pauls letter to the Thessalonians, they would realize that Muhammad has decieved them.

2 Thessalonians 2:8
And then the lawless one will be revealed, whom the Lord Jesus will overthrow with the breath of his mouth and destroy by the splendor of his coming.

Accepting the antichrist as the “Messiah” is a mortal error.  The Muslims are deceived because they have rejected the Word of God, found in the Bible, only. Believing what is written in the Koran is a dangerous trap, and a deadly deception.