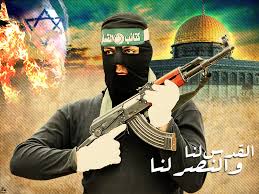 The Syrian civil war has allowed Hezbollah into southern Syria. In the Sinai desert ISIL gets ready for the ultimate attack on Israel.

According to international media reports, Israel carried out the January 18 air strike, with Western intelligence sources later saying that the targets were setting up a significant Iranian-Hezbollah terrorist base designed to target Israel.

Israeli military officers also believe that “it is only a matter of time” before the radical Islamic State jihadist organization attempts to “employ its significant military capabilities” against towns and cities that straddle the border with the Sinai Peninsula.

People who do not read their Bibles, do basically not understand anything about whats going on in the Middle East. Many Christians have also fallen into the hands of deceivers, who claim Israel is just another state. No need to pay extra attention.

The end game between God of the Hebrews and the joint forces of the antichrists, will take place inside Zion, the modern state of Israel. We know this, because the Prophetic Word says so. This fact can be rejected by the United Nations, almost all claimed to be Christians including the Pope, but it will still be the truth.

Israel will one day wake up and see the global betrayal of her calling. To become a blessing to all nations. Today, most of the people on the face of the Earth, reject that 1948 was the year the Messiah re-birthed Israel. He is the ultimate blessing. He paid for all sins with His own blood on the cross at Calvary Hill in Jerusalem. His eternal and unfailing love for His own chosen people is not being taught, not even inside claimed to be Christian fellowships.

There is no excuse for being deceived. Pastors and elders are fully capable of understanding that the Messiah is soon to return to Jerusalem. The Lion of Judah will come back to his own people in agony and distress. Because inside the city of David, the last and final antichrist will soon be hailed by the multitudes.  Zionist Israel has at this time surrendered to his false and deceptive “peace plan”.

I will gather all nations and bring them down to the Valley of Jehoshaphat. There I will put them on trial for what they did to my inheritance, my people Israel, because they scattered my people among the nations and divided up my land.

As grafted gentile believers in the Jewish Messiah, we are called to stand united with the Jewish people in their time of trouble.  Even to the point of being persecuted, and a possible martyrdom.

Stand up for truth, and resist the messages of the antichrists that has gone into the World. Lawless people will all hail the last man of lawlessness. Do not participate in their sins, but rather expose them. We urge, rebuke and we warn as we eargely await the second coming of the Messiah, our savior and redeemer.

Be aware of the correct sequences in Jerusalem. Do not end up in the wrong camp.

For the secret power of lawlessness is already at work; but the one who now holds it back will continue to do so till he is taken out of the way. And then the lawless one will be revealed, whom the Lord Jesus will overthrow with the breath of his mouth and destroy by the splendor of his coming.

We are in the 12 hour. The gospel has been preached to all nations, and everyone has got a chance to listen and repent. Now the forces of the Islamic Caliphate stands on the borders of Israel. Supported by the Islamic Republic Iran, and the Shia revolution in 1979. Bush and Blairs complete failed “war on terror” has antagonized the entire Muslim World, and rallied several hundred million Sunni Muslims behind the revenge campaign of the Islamic state.  The forces of evil, including the Bushes and the Blairs, will eventually unite. God of the Bible will draw them into Zion, and hold them accountable for all their wickedness and sins.

You do not have to spend eternity with them. You can still open your heart to Yeshua the Messiah, repent from your sins, and shun the forces of Jihad. Take a stand today. Do not delay. No one knows the exact day and time of the returning of the Messiah. Please be wise.

10 thoughts on “Hezb’Allah at Golan and ISIL in Sinai”