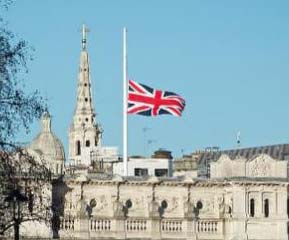 The decision to lower flags at government buildings and Buckingham Palace has angered politicians across the spectrum.

Prince Charles and David Cameron are flying to Saudi Arabia on Saturday to pay tribute to the late King Abdullah amid a growing row over the decision to mark his death by flying flags at half-mast on public buildings in London.

The sign of respect for the monarch has drawn sharp criticism from some prominent politicians and human rights campaigners because of Saudi Arabia’s abuses of free speech and women’s rights, and the country’s role as a cradle of Islamist extremism.

The leader of the Scottish Conservatives, Ruth Davidson, posted a message on Twitter condemning the move as “a steaming pile of nonsense”, and the Ukip MP Douglas Carswell said it showed Whitehall officials held immoral values far from those of the British public.

No 10, the houses of parliament and Westminster Abbey are among the buildings in London where the government guidance has been followed after Abdullah’s death overnight on Thursday.

In November 2012 David Cameron received a medal of honor from the head of the Islamic Kingdom of Saudi Arabia.

What is the fruit of such foolishness of a leader of a Conservative party, done by a man who claim to be a Christian?

For anyone who doubt that Islam is on the rise in Europe, just look at the Union Jack being lowered at Westminster to honor the death of an middle ages styled despotic ruler in Saudi Arabia. A hardcore Islamic dictatorship.

The lowering of the Union Jack at Westminster and Downing Street 10 is outrageous and a spectacular shame.

The free people of Europe must vote this kind of politicians out of the offices of power before it is too late. The cancer of Islam is spreading, and will eventually devastate our society and communities.

2 Timothy 3: 1-5
But mark this: There will be terrible times in the last days. People will be lovers of themselves, lovers of money, boastful, proud, abusive, disobedient to their parents, ungrateful, unholy,  without love, unforgiving, slanderous, without self-control, brutal, not lovers of the good, treacherous, rash, conceited, lovers of pleasure rather than lovers of God—  having a form of godliness but denying its power. Have nothing to do with such people.

Jesus the Messiah warned about terrible times, as we approach the end of the age. A time of gross betrayals, apostasy and egocentric lukewarmness.  You must guard your heart and mind against the deceivers. They claim Islam is a “religion of peace”. It will be. But only when the day arrives, when the sons of Muhammad have silenced all the true witnesses of the Messiah.