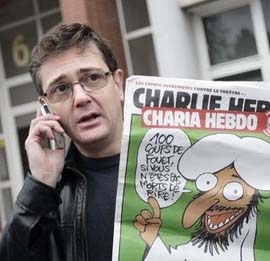 Four of the magazine’s well-known cartoonists were among those killed, as well as two police officers.
A major police operation is under way to find three gunmen who fled by car.

President Francois Hollande said there was no doubt it had been a terrorist attack “of exceptional barbarity”.

The masked attackers opened fire with assault rifles in the office and exchanged shots with police in the street outside before escaping by car. They later abandoned the car in Rue de Meaux, northern Paris, where they hijacked a second car.

Witnesses said they heard the gunmen shouting “We have avenged the Prophet Muhammad” and “God is Great” in Arabic (“Allahu Akbar”).

The number of attackers was initially reported to be two, but French Interior Minister Bernard Cazeneuve later said security services were hunting three “criminals”. He said that Paris had been placed on the highest alert.’

It is difficult to find words to describe the French elite’s betrayal of freedom of expression and liberty.

The Socialist government seems to be obsessed in its collaboration with claimed to be “Moderate Islamic forces”. The French Prime Minister is so comitted in his defense of Islam, that he has made the naiton unable to prevent the slaughter of the most obvious targets of Islamic terrorism.

It is worth noticing that the onslaught on the press in Paris took place, only a week after France betrayed Israel at the United Nation. Political support for the forcres of Islam gives no assurity, that you will not be the next target.

France have compromised on the security of its Post-Christian society. Journalists seems to have better protection in cities like Cairo. Not to forget New Delhi and Tel Aviv. Egypt, India and Israel all acknowlege the danger of Islamic terror, and have taken stepps to contain this carnage.

The military regime in Cairo has banned the Muslim Brotherhood. In France, members of terror organizations like the PLO, the Hamas and the Moslem Brotherhood can move around more or less unrestricted.

Chief  Editor Stephane Charbonnier is dead. He was one of the last defenders of freedom of expression in Europe. He is yet another prof that the police inside the European Union can not protect anyone. The political will of the leadership is not there. They would rather live in sumbission to the sons of Sharia.

Matthew 24:21
For then there will be great distress, unequalled from the beginning of the world until now – and never to be equalled again.

Jesus the Messiah promised us distress at the end of the age, days of unlimited violence caused by clashes of civilization. When we see that outright barbarians from the Muslim World are permitted the mock democracy and human rights, in the name of the said values, it is realy distressing. This European acts of sucidal acceptace of Islam takes place on the street corners of London and Paris.

Europe has to be prepared for a hard landing. If the deportations of all who support such carnage do not start immediately, Europe will be dragged into the gutter of yet another religious war. Again people will have to fighting for their lives against the sons of Muhammad. What a shame, that the elite in Europe seems to have learned close to nothing from history.

8 thoughts on “Europe digging its own grave”