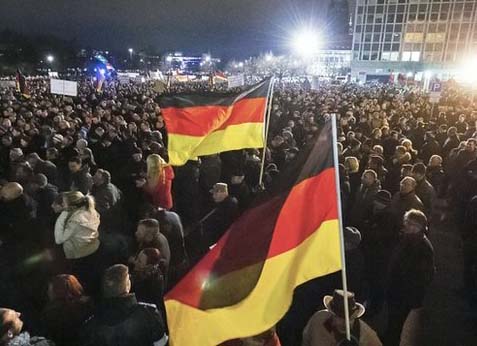 About 10,000 people have taken part in a march against “Islamisation of the West” in the east German city of Dresden.

A large counter-demonstration of more than 5,000 people was also held. No major incidents were reported.

Dresden is the birthplace of a movement called “Patriotic Europeans Against the Islamisation of the West” (Pegida), which staged a big rally a week ago.

Chancellor Angela Merkel warned Germans not to be exploited by extremists.

“There’s freedom of assembly in Germany, but there’s no place for incitement and lies about people who come to us from other countries,” Mrs Merkel said in Berlin.

“Everyone [who attends] needs to be careful that they are not taken advantage of by the people who organise such events.”
In Monday’s march, protesters chanted Wir sind das volk (we are the people) – a rallying cry used in the city in the weeks before the fall of the Berlin Wall 25 years ago.

The despotic ideology of Islam is s stranger to the European continent. By letting more Muslims immiragte, Europe is slowly digging its own grave.

What can we conclude from this carnage?

It impossible to apply the human rights on people who have no respect for human rights, but behave like demonized barbarians.

The reason for why Taliban exist is the continued support of the movement from Washington D.C. From the day Pentagon and CIA trained the first Taliban’s in the late 1970-ties, till todays transfer of money and theology to “moderate Muslims” in Kabul. Hundreds of millions of dollars have been gifted to corrupt government officials and local war lords. People who in the very next moment have deserted the naive Americans, and joined al-Qaeda or the Taliban.

If Europe do not start to deport Muslims from London and Paris, it will soon be a blood bath in their streets. If Muslims who follow the example of Muhammad are not deported back to their own despotic kinder gardens, the post-Christian continent will go to the dogs.  It is only a question of time before the Jihadist’s will lay claim to Europe. In their footsteps comes terror and eventually a civil war.

Why do Europe listen to its apostate and completely disconnected leaders?

Why is Islam presented in public schools as the religion of peace?

Why do Europe want to harm it self in this way?

Will there be an end to these lies, and a full reversal of the present suicidal immigration policies?

We know from scriptures, that the sons of the devil work overtime to complete Satan’s work on Earth. We also know that this work will lead to the complete degeneration of civilized culture and society. But its time to acknowledge the problem, and ban the ideology of Islam from European soil.

John 3:19
This is the verdict: Light has come into the world, but people loved darkness instead of light because their deeds were evil.

May the name of Jesus the Messiah be glorified, and people lead into repentance for permitting a former Christian continent to be dragged down the path of destruction.