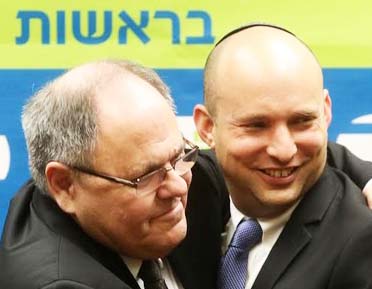 Former Council of Jewish Communities in Judea and Samaria chairman Dani Dayan, one of the settler movement’s most eloquent defenders, announced Sunday that he will be seeking a Knesset seat with Bayit Yehudi.

Dayan complained that there were too many politicians who say “yes, but” to the two-state solution. “It is natural for me to join the party that says no unequivocally to a Palestinian state,” he said.

Dayan made the announcement at the Knesset in a joint press conference with Bayit Yehudi leader Naftali Bennett. Dayan and Bennett, who sparred when they worked together at the council, said they settled their differences at last weekend’s Saban Forum.

“People at the Saban Forum were so focused on Buji [Labor leader Isaac Herzog] and [Hatnua head] Tzipi [Livni] that they missed the real bond between me and Dani Dayan,” Bennett said.

Bennett noted that their relationship “had its ups and downs,” when he worked for Dayan for two years, but said it was important to set aside differences for a greater good.

Evangelical Christians outside Israel should not get involved in Israeli politics, and set up political conditions for support of the Jewish state.  Our support for the Jewish people is based on scriptures, on the eternal promise of the Messiah being the rock of Israel, and the King of the Jews. There would be no state of Israel, if the Messiah suddenly removes His protection.

True Evangelical Christians will stay united with all Jews who believe in Biblical Zionism.  The city of Jerusalem is liberated, and the capital of one nation, only. And all Israeli nationals have the right to live in the districts of Judea and Samaria.

The only political party in Israel who stand solidly on these two principles is Bayit Yehudi. This party reject that there is a “Palestinian people” who has the right to build yet another Arab state on the mountains of Israel.

Stand up for the Jews right to live in Judea and Samaria. Stand united with the liberated city of Jerusalem. This is pleasing to Yeshua the Messiah.