Bloomberg flied to Israel from New York to protest a ban by the Federal Aviation Administration that is preventing U.S. airlines from flying into or out of Israel’s Ben Gurion International Airport. 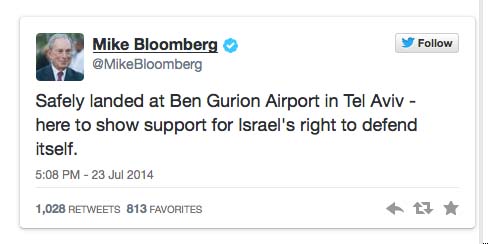 Bloomberg tweeted that he landed “safely ” at Ben Gurion Airport in Tel Aviv, adding that he’s there “to show support for Israel’s right to defend itself.”

Its difficult to compare the Obama enforced air-embargo of Israel.  The only parallel in history seems to the the Russian embargo on Berlin in 1960. At that time the USA was a defender of freedom and democracy. Today the USA helps the forces of Jihad in their bid to destroy the Jewish homeland.

By banning US civil aircraft from flying to Israel, Barack Hussein Obama display his true Islamic colors. Let us all give thanks to Michael Bloomberg, for standing united with his Jewish brothers and sisters in their time of trouble.

May Jesus the Messiah bless both Michael Bloomberg and Benjamin Netanyahu. Amen.