How do the World leaders relate to a man you would not invite home for dinner? Take a look at this photo feature on Mahmoud Ahmadinejad, a man willing to create another Holocaust and destroy Israel.

The Iranian President Mahmoud Ahmadinejad has denied the Holocaust in public. In media he has expressed a desire to genocide the Jewish people, and wipe the state of Israel of the map. If your own daughter had uttered such words, she would have been arrested and put in prison. In Germany and Austria ordinary citizens would get at least five years behind bars for such comments. Yesterday Turkey announced that it wants to increase the annual trade with Iran from two billion USD to 20 billion USD.

Many countries supports Ahmadinejad, beacuse he «means business». For Israel he certainly does. Political leaders all over the World wine and dine with a man that they should have treated as a criminal.

Take a closer look on the Ahmadinejad hall of shame: 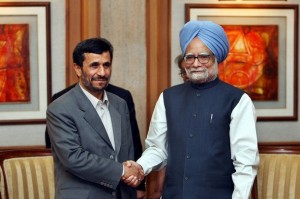 The Jewish Messiah once said: «The love of money is the root of all evil»…..

5 thoughts on “Ahmadinejad loved like one of their own”