23 per cent of 1000 Germans in a poll said they would allow a chip implanted under their skin for «certain benefits». 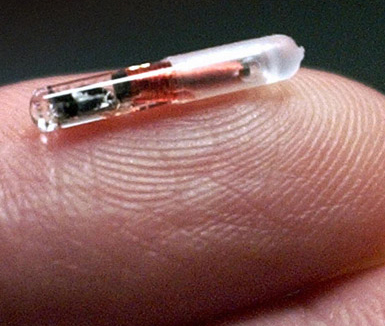 One in four Germans would be happy to have a microchip implanted in their body if they derived concrete benefits from it, a poll Monday showed.

The survey, by German IT industry lobby group BITKOM, was intended to show how the division between real life and the virtual world is increasingly coming down, one of the main themes of the CeBIT trade fair that kicks off Tuesday.

In all, 23 percent of around 1,000 respondents in the survey said they would be prepared to have a chip inserted under their skin «for certain benefits».

Around one in six, or 16 percent, said they would wear an implant to allow emergency services to rescue them more quickly in the event of a fire or accident.

And five percent of people said they would be prepared to have an implant to make their shopping go more smoothly. But 72 percent said they would not «under any circumstances» allow electronics in their body.

The results appeared to surprise even the high-tech sector.

«This is of course an extreme example of how far people can imagine networks going», said BITKOM chief August-Wilhelm Scheer.

The CeBIT, the world’s biggest high-tech fair, throws its doors open to the public on Tuesday, with Spain, the current EU president, this year’s guest of honour.

The image of the beast in money, and people who love money do worship the image in form of currency notes they have collected, gold and properties.

In our generation the image of the beast has changed from being printed on a piece of paper, into an electronic number. Currency notes are soon going to be phased out.

Credit cards and Internet banking is just the start of the electronic age of buying an selling, soon to be limited to those who have the electronic devise implanted in their body.

There will be many offers of «huge benefits» for accepting such an electronic implant. Medical, economical and cultural. You will never loose your way, and before you even realized you were sick, the doctor will come and quarantine you….