JERUSALEM: A Vatican spokesman had to clarify that young Joseph Ratzinger’s had a mandatory enrollment with Hitler’s youth organization. The Vatican and the Pope claims: «It had no role in his life».

«I have read something that is not true. The Pope never, never formed part of the Hitlerjugend, which was a corps of fanatic and ideological volunteers».

The spokesman later clarified his own statement because the Pope’s enrollment in the Hitler Youth was explained by Joseph Ratzinger himself in «Salt of the Earth» There he says he was automatically enrolled in the organization, though he did not participate in it.

In his book, Cardinal Ratzinger explains:
-Q: «Were you in the Hitler Youth?»

«At first we weren’t, but when the compulsory Hitler Youth was introduced in 1941, my brother was obliged to join. I was still too young, but later, as a seminarian, I was registered in the Hitler Youth».

Facts about the Hitler Jugend 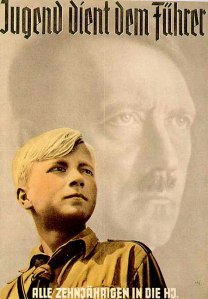 The Hitler Jugend (HJ) was a paramilitary organization of the Nazi Party. It existed from 1922 to 1945. The HJ was the second oldest paramilitary Nazi group, founded one year after its adult counterpart, the Sturmabteilung (the SA).

5 thoughts on “Vatican: The Pope was a member of «Hitler Youth»”