May 28, 1948: The Jewish quarter of the old city of Jerusalem falls to the Jordan Legion. The inhabitants were protected from the wrath of a lynch mob by the Legion under Abdullah Tell, and noncombatants were expelled to West Jerusalem.

About 300 Haganah defenders were taken prisoner and sent to Jordan. The entire quarter including 58 of the 59 synagogues was demolished by the Arab mob despite efforts of the Legion. 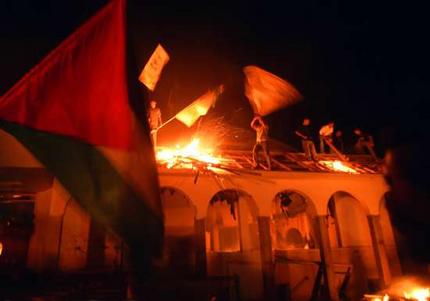 «Hours after the Israelis left the settlement of Neve Dekalim, young Palestinians were tearing aluminum window frames and metal ceiling fixtures out of the main synagogue there, as fires burned inside. The Palestinian flag and the flag of the militant group Hamas flew from the roof … The Palestinian leadership said it respected places of worship, but did not want the responsibility of having to protect buildings that many Palestinians want to tear down as symbols of «Israel’s occupation».

25,000 to 30,000 Jews were arrested and deported to concentration camps. More than 200 synagogues were destroyed and thousands of Jewish homes and businesses were ransacked. Hitler wanted to make a final end to the «Jewish and Communist occupation» of Germany and Jewish influence in Berlin.

Israel have never denied access to Muslims and Christians to their holy sites in Jerusalem, after IDF liberated Jerusalem from Arab occupation i 1967.

Before 1967, the Jews did not have free access to their Holy sites in East Jersualem.

All Christians and Muslims should thank Israel for their grace, safety and protection in regards to their effort to safe guard Christian and Muslim interests in Jerusalem.

And to all Jews and Christians: You will never be granted such freedom in any Arab nation.

People of Israel: Do not give up your control over Jerusalem.

2 thoughts on “58 Synagogues in Jerusalem destroyed”